In a shocking turn of events,  popular Bhojpuri actress Trisha Kar Madhu's  MMS video has been leaked online and ...

In a shocking turn of events,  popular Bhojpuri actress Trisha Kar Madhu's  MMS video has been leaked online and is going viral on social media. In the viral video, the actress can be seen in a compromising position with a man whose identity is not known yet. Now, the actress took to her Twitter handle and shared her statement on the same. She tweeted in Hindi, which loosely translates to, 'God watches over everything. 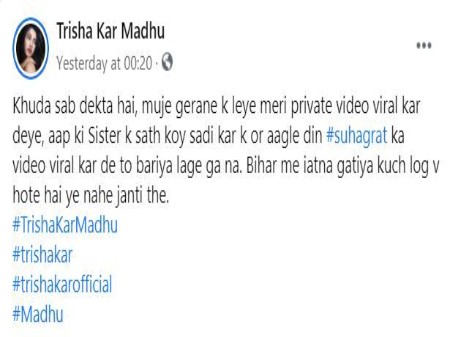 The guy made my private video viral. If your sister gets married and the next day, someone leaks her first-night video, it will be good right? People don't know there are some worst people in Bihar.' She also took to her Facebook account and while addressing the incident, she claimed that no one is 'clean' in the Bhojpuri film industry. However in another post, she confessed that the video is made by her only but she was not aware how it got published on social media. Meanwhile, talking about the Trisha, she is 27 years old actress of Bengali origin and is known to play bold roles in Bhojpuri films. Talking about her work front, she made her debut on the small screen with a Bhojpuri serial ‘Hum Hain Hindustani’. After this, she turned to the big screen and was featured in several video songs and movies. Her upcoming films are 'Dulhan Ganga Paar Ke', 'Jaani Dushman' and 'Mukaddar'.