Kareena Kapoor Khan took to Instagram Stories on Saturday night to share a picture of her dinner. She enjoyed ...

Kareena Kapoor Khan took to Instagram Stories on Saturday night to share a picture of her dinner. She enjoyed  some biryani, sent over by actor Prabhas. “When Bahubali sends you biryani it's gotta be the best. Thank you Prabhas for this insane meal,” she wrote and added the Adipurush hashtag. Prabhas and Kareena's husband, actor Saif Ali Khan will be seen together in Adipurush, an adaptation of Hindu epic, Ramayana. The 'Baahubali' actor, who is known to be quite the foodie.  The actor sent containers full of authentic biryani for Saif and his actress wife Kareena Kapoor Khan. 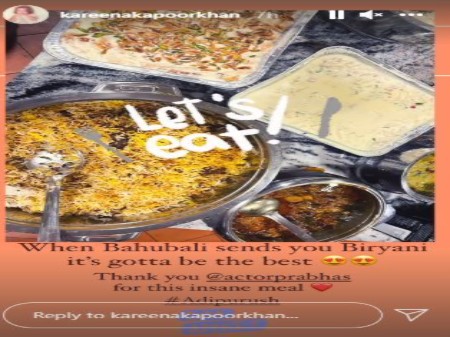 Prabhas made sure to send along biryani with raita, salad, and some other food items. Adipurush' will see Saif team up with Prabhas for the first time. About teaming up with Saif for the first time, Prabhas had earlier said, “I am excited about working with a talented actor like Saif Ali Khan. To be featuring alongside such a great actor on the big screen is a matter of pride for me.” The film is directed by Om Raut of Tanhaji: The Unsung Warrior. Prabhas said about the movie, "Every role and every character comes with its own challenges, but portraying a character like this comes with tremendous responsibility and pride. I am very excited to portray this character from our epic specially the way Om has designed it. I am sure the youth of our country will shower all their love on our film.”