Sushmita Sen confirms she has not adopted a third child www.lokmattimes.com

Sushmita Sen confirms she has not adopted a third child

Sushmita Sen has been hitting the headlines ever since she was spotted with a baby boy and her daughters ...

Sushmita Sen has been hitting the headlines ever since she was spotted with a baby boy and her daughters in the city. Soon rumours began doing the rounds of actress adopting a third child. However, the Aarya actress has now cleared the air in her latest social media post. Introducing the mysterious baby boy as her ‘god child’, she dropped an adorable picture and wrote, “Having a chat with Godson Aamdeus about the random news concerning him, going viral in the media…his expression says it all!!! Picture courtesy Sreejaya (Amadeus’s mom).” 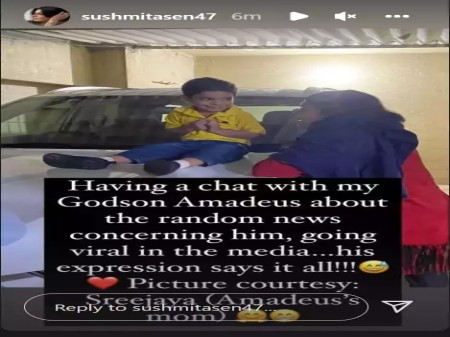 The picture features Sushmita during a candid chat with the baby boy who is seen sitting on the bonnet of a car in a parking lot. On the work front, the actress was last seen in 'Aarya 2' which garnered a lot of appreciation and love from the audience. Talking about the web show, Sushmita had told IANS, "My mother binge-watched the second season with me! My Father was choked with emotion when he called me from Kolkata and told me how proud he is of me after watching the series. Helmed by Ram Madhvani, the series was released on the ott platform on December 10, last year.